To obtain this discounted price, click here to order direct from the author (payments will need to be made via MyPayPal).

A decade on from his first groundbreaking book on Islamophobia, Chris Allen revisits the realities of Islamophobia in his new book “Reconfiguring Islamophobia: a Radical Rethinking of a Contested Concept”.

The book investigates why Islamophobia remains contested, exploring the problematic relationship that exists between Islamophobia in the political spaces and Islamophobia as a ‘real’ and tangible phenomenon that affects the everyday lives of Britain’s Muslims. In doing so, Allen radically re-frames and reconfigures existing notions and understandings about Islamophobia. He does this in two ways. First, through presenting first-hand accounts gathered from more than 100 victims of Islamophobic hate crime. Second, through the unrivalled ‘insider’ experience he gained as an independent adviser on Islamophobia and associated issues to various political, community and third sector stakeholders. Challenging existing scholarly conceptions of Islamophobia, the book also challenges politicians and policymakers to do more.

Endorsements for the Book

“This latest work, by one of the most established scholars in the field, provides an important opportunity for reflection on how Islamophobia has been debated and responded to in the academic, public and political contexts. Debates about Islamophobia, how it is defined, how it manifests and should be responded to, have dominated relevant scholarly, political and public discourse for decades. Here, Allen argues that meaningful action to challenge Islamophobia is yet to materialise at the level of government. As such, ordinary Muslim people are left to live with the consequences of Islamophobia. Drawing on evidence from a range of contexts, this book adds to the growing evidence of “tangible Islamophobia” in contemporary societies. However, in doing so, Allen also lays down a challenge to the scholarly community, civil society actors and policy makers alike. For Allen, those of us engaged in challenging Islamophobia need to reflect on our actions, roles and affiliations if we are, as he puts it, going to “catalyse (radical?) change.”

“This book investigates the contested phenomena of Islamophobia, exploring the dichotomous relationship that exists between Islamophobia as a political concept and Islamophobia as a ‘real’ and tangible discriminatory phenomenon. In doing so, this book improves understanding about Islamophobia through arguing how this dichotomous contestation serves a number of functions. To do so, Allen radically reframes and reconfigures existing notions and understandings of Islamophobia. It does so in two ways. First, through presenting empirical data gathered from more than 100 victims of Islamophobic hate crime to categorically evidence that Islamophobia is indeed real and tangible. Second, through unrivalled ‘insider’ experience gained as an independent adviser on Islamophobia and associated issues to various political, community and third sector stakeholders. Challenging existing scholarly conceptions of Islamophobia, this book also challenges politicians and policymakers to do more.”

For almost two decades he has been at the forefront of research into Islamophobia and anti-Muslim hate. Over this period of time he has researched, written and commented extensively on the impact of 9/11 and 7/7, the victimisation of visible Muslim women, the emergence and subsequent development of the Prevent agenda, and the rise of far-right movements including the English Defence League, Britain First and National Action among others.

He therefore has expertise in: Islamophobia; the contemporary ‘problematisation’ of Muslims & Islam; issues relating to counter-terror & counter-terror; manifestations of hate, bigotry & discrimination; the radical and far-right in Britain & Europe; the role of religion in the public & political spaces; and notions of identity relating to Britishness.

This website fits with Chris’s commitment to the notion of being a ‘public academic’ and his adherence to ‘open access’. As such, it is designed to give access to as many of his publications, outputs and resources as possible. These include academic publications (books/chapters and journal articles), comment pieces, policy briefs, public lectures, media appearances and links to mentions in the news. If you want to find out more about Chris, click here. Alternatively,  use the menu at the top of the page to explore and (hopefully) find something of interest.

If you want to get in touch, click here.

Buy “Reconfiguring Islamophobia: a radical rethinking of a contested concept” at the special price of £25.00 inc P&P in the UK (45% off the RRP of £44.99) – click on the image below to link to PayPal 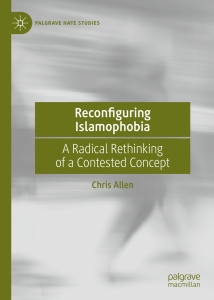